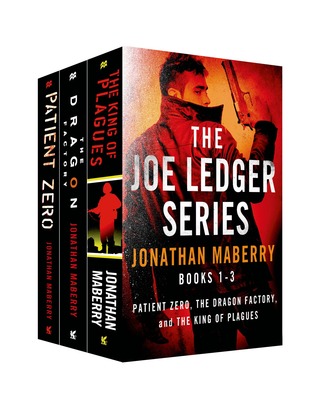 Now available together for the first time, don't miss the beginning of Jonathan Maberry's New York Times bestselling series about intrepid warrior, Joe Ledger, and his death-defying missions with the Department of Military Sciences in books 1-3 of this spectacular series! Join Joe and his Echo Team as they face off against sub-human horrors and villains that Ledger's team set out to make sure the world will never know in this heart-pounding bundle containing Patient Zero, The Dragon Factory, and The King of Plagues!

In Patient Zero, Ledger knows that when you have to kill the same terrorist twice in one week there's either something wrong with your world or something wrong with your skills... and there's nothing wrong with his skills. And that's both a good, and a bad thing. It's good because he's a Baltimore detective that has just been secretly recruited by the government to lead a new taskforce created to deal with the problems that Homeland Security can't handle. This rapid response group is called the Department of Military Sciences or the DMS for short. It's bad because his first mission is to help stop a group of terrorists from releasing a dreadful bio-weapon that can turn ordinary people into zombies. The fate of the world hangs in the balance....

In The Dragon Factory, Joe Ledger and the DMS (Department of Military Sciences) are called upon again to go up against two competing groups of geneticists. One side is creating exotic transgenic monsters and genetically enhanced mercenary armies; the other is using 21st century technology to continue the Nazi Master Race program begun by Josef Mengele. Both sides want to see the DMS destroyed, and they've drawn first blood. Neither side is prepared for Ledger as he leads Echo Team to war under a black flag.

In The King of Plagues it's Saturday at 09:11 Hours when a blast rocks a London hospital and thousands are left dead or injured… At 10:09 Hours: Joe Ledger arrives on scene to investigate. The horror is unlike anything he has ever seen. Compelled by grief and rage, Joe rejoins the DMS and within hours is attacked by a hit-team of assassins and sent on a suicide mission into a viral hot zone during an Ebola outbreak. Soon Joe Ledger and the Department of Military Sciences begin tearing down the veils of deception to uncover a vast and powerful secret society using weaponized versions of the Ten Plagues of Egypt to destabilize world economies and profit from the resulting chaos. Millions will die unless Joe Ledger meets the this powerful new enemy on their own terms as he fights terror with terror.